Sausages are an excellent source of protein, but they also contain a number of nutrients that promote health and wellness. The variety of ingredients that go into sausage making makes them a delicious addition to a wide range of dishes.

There are hundreds of varieties of sausages around the globe, each with its unique flavor profile. These include pork, beef, poultry, seafood, vegetables and even fruits such as apples and pears. They are usually served hot or cold, either alone or accompanied by bread or crackers.

When selecting a seed variety for sausage making, consider the size of the meat chunks, the amount of fat and moisture in the final product, how much spice is desired, and if you want your sausage to be sweet or savory. Some seeds can be used whole while others must first be cracked before being added to the mix. 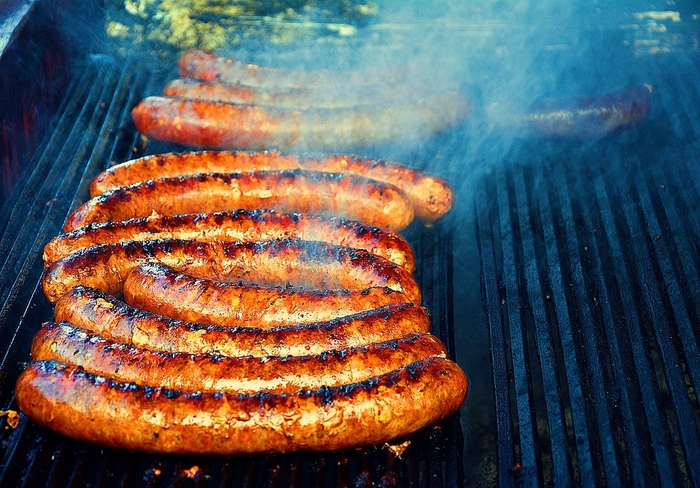 Some sausages use seeds, and occasionally those seeds are what makes them so distinctive. But sometimes people might not notice or even value these unique taste ingredients.

I did a little more research to learn as much as I could about these seeds and their role in the production of sausage.

Does sausage contain seeds? Fennel is the most typical seed used in sausages. Fennel seed is a common ingredient in “Italian” sausages made in the US. When creating sausage, seven different seeds are utilized. Nearly all are ground before use.

You either love them or you detest them—the famed fennel seed. I hope you don’t mind the taste. because fennel-free Italian sausage is difficult to get in the United States.

Originating from the same plant family as fennel. Fennel seed and caraway seed both have similar fruit appearances. It is a little bit longer and slightly darker in color.

Along with licorice undertones, caraway also has a flavor that is more nutty than sweet. Additionally, whole or toasted caraway seeds can be consumed.

Caraway resembles cumin seed the most out of the seven seeds. Some sausages, like smoked Hungarian sausages, directly incorporate caraway.

Similarly to fennel, caraway, and cumin, anise belongs to the same family. These also have a flavor that is extremely similar. Because anise tastes more like licorice than fennel does, it was sometimes used to flavor licorice candy.

For seasoning meats or breads, anise seed (fruit) is utilized. This seed is frequently used in pizzas with Italian sausage.

The use of anise or fennel seed can occasionally make a distinction between Italian sausage and pork sausage in pizzas. The flavor will be sweeter, in case you were ever curious.

You can combine anise and fennel seeds when preparing homemade sausages. Fennel and anise can be swapped for one another because their flavors are so similar.

The size and form of the seeds might help you distinguish between fennel and anise. The size and color of fennel seed are significantly greater.

The spicier of the seeds, cumin is related to fennel, caraway, and anise-related plants. Cumin is often ground before being used in sausages. as opposed to a whole seed, like fennel.

Cumin seed tastes nutty and earthy, similar to caraway, but the similarities end there. Cumin has a stronger flavor than caraway and a brighter brown hue overall than fennel.

When used in sausages, the coriander (also known as cilantro) herb’s seeds are pulverized. South Africa and Germany are the two nations that use coriander seeds primarily for sausages.

South African boerewors sausage is a particular variety. The terms “farmer” and “sausage” are translated to form the name. Another South African sausage that uses coriander is mettwurst. Before use, the coriander seeds are roasted.

In Germany, coriander seed is a typical spice found in both bockwurst and landjaeger sausage. Many types of homemade bratwurst contain coriander.

Coriander has a flavor that has been compared to lemon or orange citrus with a hint of spice.

Mustard seed can be used whole or crushed and is frequently used for summer sausages. As a whole, the seeds don’t have much flavor. The inside of the seed contains the flavor and scent.

The flavor of the mustard seeds helps to come out when they are ground, but it doesn’t last for very long.

Round and thin, mustard seeds are simple to chew and will explode when you bite into one. The seed is usually more spicy if it has a deeper hue.

Batches of kielbasa from smaller butcher shops frequently contain mustard seed. The meat’s mouthfeel and texture are also improved by the seeds. Additionally, it might offer the sausage slices a distinctive look and presentation.

Mustard seed is included in a lot of venison summer sausage recipes. Crushed or whole, mustard seed is another widely used spice for pepperoni.

Celery seed can be used whole or crushed and is not unique to one kind of sausage. Instead, it is frequently offered as a sausage spice that may be added to almost any homemade sausage.

It is occasionally served with sauerkraut and polish sausages. It may be included in the beer or apple cider used to cook the sausage. Celia seed is frequently used to flavor breakfast sausages.

What is the raw material for sausage? 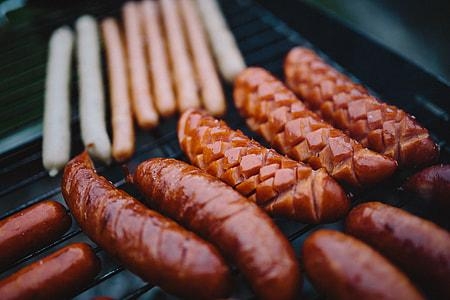 Sausage is usually produced from meat (sometimes poultry) minced, seasoned, stuffed into casings, cooked, sliced, and then packaged. It is typically used in Italian cuisine, although other countries produce sausages using similar ingredients.

What are the different sausage product fillings?

Sausage products are widely used during holidays, such as Easter, Christmas, New Year, Valentine Day, Thanksgiving, Halloween and many others. A wide range of sausages can be prepared according to people’s preferences. Sausage products are usually served as appetizers or side dishes. Before eating, we always clean the fingers that handle the sausage products by using hand sanitizer or antibacterial soap. We should wash our hands thoroughly after handling these kinds of products.

Sausage making requires a blend of spices and herbs. These ingredients help to give flavor to the sausages. It is important to know what type of sausage you are making because different types of sausage require different spices. Below are the seven main spice blends used in sausage making. Wheat Flour Cornmeal Whole Grain Bread Flour Rye flour Spelt flour Barley flour Oats

Ground spices are ground whole spices. These spices are usually used to flavor dishes. They are available in different forms such as powder, granules, flakes, and even liquid form. These spices are very useful because they give a unique taste to the dish. You can also mix these spices with other ingredients to enhance the flavor. Some examples of spices are cinnamon, cloves, cardamom, nutmeg, ginger, turmeric, cumin, coriander, pepper, fenugreek, mustard seeds, curry leaves, bay leaf, black peppercorn, saffron, paprika, and many others.

What Is Fennel Seed?

Fennel seed is a spice that comes from the plant fennel. It is known for its sweet licorice aroma and flavor. It is used in various cuisines around the world. It is mostly used in Indian cuisine. It is also used in Italian, Chinese, Middle Eastern and Scandinavian cuisines. It is also used as a garnish in salads and desserts.

Cumin seeds are used extensively in Indian cuisine. In India, cumin seeds are called "jeera" जीरा and are widely used in curries, pickles, chutneys, and other dishes. Cumin seeds are native to the Middle East and Central Asia.

Coriander seed is a common ingredient in many cuisines around the world. It is known as coriander in English and korisnica in Croatian, and is also known as cilantro in Spanish and Italian. Coriander is a member of the carrot family Apiaceae. It is grown throughout the world, especially in tropical climates.

Caraway seeds taste bad because they are not roasted properly. Roasting caraway seeds removes the bitter flavor from them. To roast caraway seeds, place them in a dry skillet and heat them until they become aromatic. Then remove the seeds from the pan and cool them down completely. This process gives the seeds a pleasant aroma and flavor.

Buying seeds online is a great way to save money but if you buy them in store you get better quality seeds. It is important to know what type of seed you are buying. For example, if you are looking for sunflower seeds, you should buy them in a store where you can see the label clearly. Also, you should check the expiration date and the moisture content. If you buy seeds online, you won’t be able to see these details. However, if you buy seeds in a store, you will be able to see these information. How to Grow Vegetables Indoors

What is the raw material for sausage?

Sausage is a type of meat product that is usually made from ground meat. It is typically seasoned with salt, pepper, sage, thyme, oregano, garlic, and other spices. Sausage is generally served hot or cold.

What are the different sausage product fillings?

What seeds are used in sausage?

Sausage products are usually filled with meat, vegetables, spices, seasonings, herbs, and other ingredients. Sausages are generally categorized into two types: dry sausages and wet sausages. Dry sausages are made from ground meat mixed with salt, pepper, sugar, and other flavorings. Wet sausages are made using brine a solution of water, salt, and sometimes vinegar as a base. Both types of sausages are cooked in casings, which are thin sheets of edible protein that help hold the shape of the sausage during cooking.

How do you make sausage at home?

What are the seeds in pizza sausage?

What is another name for caraway seeds?

What are the ingredients used in making sausages?

Sausage is a meat product that is formed into links and sold either uncooked or cooked. It is usually made from pork, beef, lamb, poultry, fish, shellfish, vegetables, fruits, nuts, herbs, spices, or other ingredients. Sausages are typically seasoned with salt, pepper, garlic, and sometimes other flavorings. Sausages are generally smoked or cured after being prepared.

In conclusion, I hope this guide has been helpful in guiding you to the best seeds for your sausage making needs. I will continue to update this list as I try new seeds and evaluate the results. If you have any suggestions for changes or have any questions about our seeds, please leave a comment below!