Instant pots are electric pressure cookers with multiple functions that can be used to swiftly prepare foods and meals. You can use an instant pot to rapidly prepare anything if you don’t want to use the microwave. When compared to other appliances, they can prepare anything from roast chicken to desserts in a fraction of the time.

Instant pots do not explode in the same way as pressure cookers from a decade ago did. They have ten safety mechanisms that protect them from such situations. These features are intended to keep the instant pot from performing in a dangerous manner. If this occurs, the pot will automatically shut down or lower any internal pressure. Even with such features, there have been reports of explosions, and in this essay, I will do my best to explain why this occurs.

Contents hide
1 What is an instant pot and how does it work?
2 The ten elements of safety
2.1 Close detections of the lid
2.2 Protection against leaking lids
2.3 Anti-obstruction vent
2.4 Controls for temperature
2.5 Warning of extreme heat
2.6 Under pressure, the lid locks
2.7 Controlling the pressure automatically
2.8 Protection from excessive pressure
2.9 Protection against extreme temperatures and electricity
2.10 Protection for the pressure regulator
3 What causes an instant pot to burst and why?
3.1 Steam release valves are being blocked.
3.2 Filling it over max level
3.3 Not altering the seal
3.4 Ignoring the instructions

What is an instant pot and how does it work?

People prefer to use pressure cookers because they allow them to prepare food in a short amount of time that might otherwise take hours. 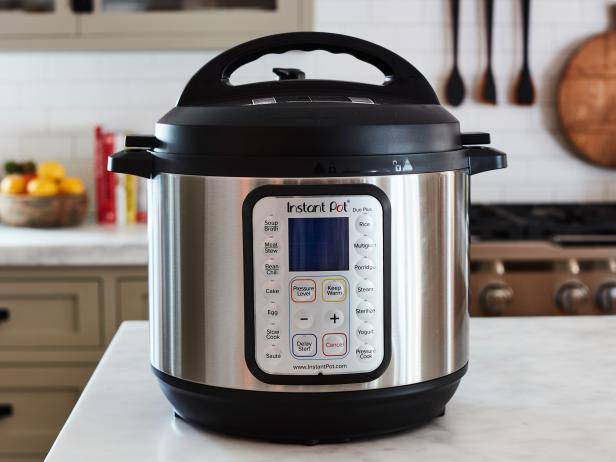 Pressure cookers operate by enclosing the food in a sealed container while it cooks. When you put liquid inside a pressure cooker and bring it to a boil, it helps to create pressure, which helps to cook the food more quickly than with traditional cooking. To prevent explosions, this pressure must be carefully managed and maintained to a precise level. The pressure in earlier pressure cookers is controlled by a weighted pressure regulator, which is generally located on the top.

This is accomplished in instant pots by using a pressure regulator to regulate the temperature between 10.12 and 11.6 psi. If the pressure within the pot surpasses 15.25 psi, the steam inside the pot is automatically pushed up and released until it enters its ideal range. The majority of accidents occur as a result of a lack of information. This knowledge will come in handy not just when using instant pots, but also when using any type of pressure cooker.

An instant pot’s safety is ensured by ten features. Let’s take a short look at those ten characteristics.

The ten elements of safety

Instant pots were built with features that will avoid such mishaps by keeping n in the explosion inside the pressure cookers.

Close detections of the lid

If the lid of the instant pot isn’t properly closed while it’s being used, the instant pot will not initiate any pressure cooking until it is. In certain of the selected models, however, the suaté and stay warm features are available.

If there is any type of leakage, the instant pot’s programming will immediately switch to maintain warm settings and no pressure will be built up to any preset pressure levels.

It is possible for food to become stuck or clogged in the steam release valves when cooking. A vent shield is built into instant pots to prevent food particles from clogging the system.

If the temperature inside an instant pot rises due to factors such as lack of moisture or other factors, the heat will be turned off, protecting the food from being burned or other mishaps. Excess heat and electric currents are protected by a fuse in instant pots. Pressure sensors maintain the ideal temperature range between 10.12 psi – 11.6 psi.

Under pressure, the lid locks

Instant pots provide a critical safety feature in this regard. When the pressure within the cookers isn’t released properly, the lid will automatically lock, preventing it from opening until the pressure returns to normal.

An automated pressure control function is also included in an instant pot, which is coupled to a regulator that releases steam and removes it from the pot if the pressure reaches 15.23 psi.

Finally, if the regulator fails, an instant pot provides an additional layer of safety as a backup strategy.

When the pressure within the pot becomes too high, a safety mechanism kicks in, shifting the pots inside the coker downwards, creating a space between the lid and the inner pot, allowing steam to escape into the chamber and halting any further heating.

Protection against extreme temperatures and electricity

Protection for the pressure regulator

If there is too much pressure within your pot, it will produce steam, so don’t be concerned if it starts producing a hissing noise or releasing steam. When the pressure within the pot exceeds 15.23 psi, the steam inside is automatically released until the temperature reaches its ideal range.

There are practically no chances of an instant pot exploding if all of these safety elements are considered while constructing it. However, there are still explanations and examples of quick pots exploding. Manufacturers make every effort to supply you with quick pots that have characteristics that avoid explosions.

What causes an instant pot to burst and why?

Even with such characteristics, an instant pot has burst in certain circumstances. We need to figure out why this happens. 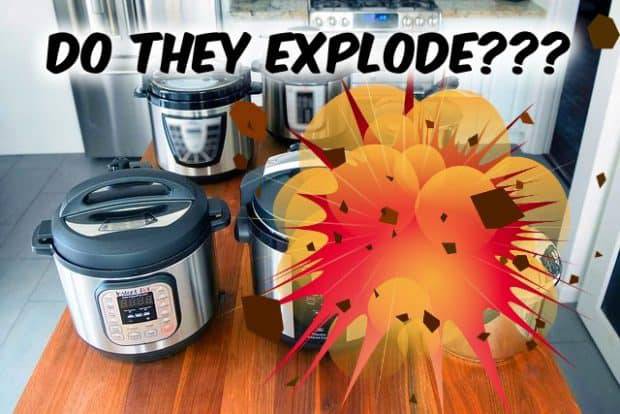 Steam release valves are being blocked.

This can happen for a variety of reasons, the most common of which being food particles becoming stuck in the valve. This may prevent the pressure inside from being released, perhaps resulting in failure or malfunction.

The release valves and other critical components within the instant pots should be cleaned on a regular basis. If the steam valve is obstructed by something like a cloth or a dish towel, explosions might occur. Ensure that the steam release valves are kept clear of any obstructions.

Filling it over max level

This is a regular occurrence and a primary cause of instant pot explosions. People have a tendency to overfill the pot. If you load it to the maximum capacity, some food that expands while cooking may become blocked or trap the steam releasing valves, resulting in excess pressure and explosions.

Not altering the seal

Every 12-16 months, the sealing rings within your instant pot must be replaced. It should also be cleaned. A defective sealing ring is also a common cause of explosions.

The handbook outlines everything that should be done and what should be avoided. It comprises all of the product’s characteristics as well as the precautions to be followed when using it. As a result, before using any equipment, one should always read the instructions thoroughly.

These are some of the situations under which the instant pot may burst. You may easily avoid such mishaps if you are attentive enough and have the necessary safety elements.

Instant pots are fantastic gadgets that speed up the cooking process and are also built with the customer’s convenience and safety in mind.

If you do not use it correctly and cautiously, just like any other equipment or appliance, you risk injuring yourself or causing an accident.